Throughout the development process, multiple designs were modeled, prototyped, and tested - all to ensure that the S34 Carbon Fiber Intake delivers measurable performance benefits and superb fitment. The result is an optimized open-airbox design that utilizes the factory fresh air duct inlet to channel cool outside air to the filter. This large airbox design allows for a massive 4" inlet conical air filter, free of restrictive shrouding, and channels air through a CFD-optimized 4-ply silicone inlet hose that smoothly increases air velocity to the throttle body.

NOTE: This intake will only fit utilizing the GTI battery. This will not fit on AWD VW/Audi vehicles with the OE larger-sized battery. If your car came equipped with the Larger Group 46/H6 battery, you will need to switch to the GTI Battery as listed below:

034Motorsport focuses on optimizing every aspect of the intake system across a broad range of variables and compromises. A critical component of a high-flowing performance intake is the ability for air to flow around and into the filter. If the air cannot flow freely around the filter, it will be restricted from getting into it. Many aftermarket kits fit too large of a filter in an enclosure that cannot accommodate its size, thus choking the filter and reducing its overall flow. This often happens when a product is engineered for one variable at the expense of others. 034Motorsport conducted extensive tests and refined its development of the intake design to allow for maximum airflow surrounding the air filter, allowing for optimal airflow to, and through, the filter. The final result is the right size filter in the right size filter housing, creating maximum airflow and performance with OEM level filtering; the ultimate goal of any intake system. Be cautious of any intake that brags only of the air filter size, without taking into account the detrimental effects of shrouding the filter.

034Motorsport engineers first created a CFD-optimized 4-Ply silicone intake tube, which is a direct, high-performance replacement for the plastic factory accordion/sound deadening hose. Using CAD software and 3D scanning technology, 034Motorsport was able to optimize the cross-sectional area of the intake tube while being mindful of space constraints. The resulting part is a functional work of art - maximizing performance given the factory space constraints and featuring smooth transitions that ensure optimal airflow to the throttle body.

While many intake kits leave the air filter unsupported and ”flopping” around, 034Motorsport engineers designed a clever air filter support that not only prevents unwanted movement but also allows compliance to accommodate engine movement under varying load conditions. An added benefit is an air shroud that doesn’t move and rub on other engine compartment components like many other designs on the market do. 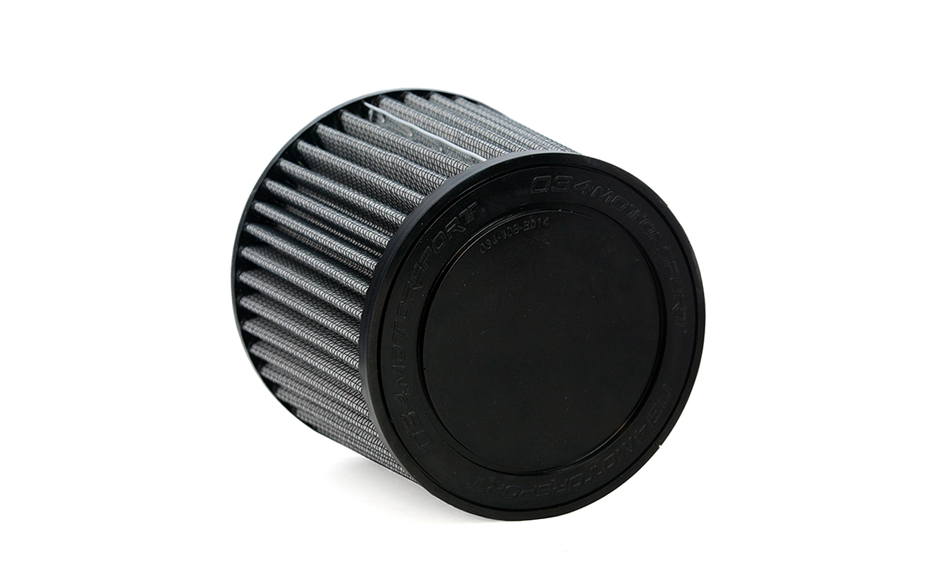 There are several ways to quantify the performance of an engine system's intake, the intake being the air box with filter that allows ambient air to enter the engines induction system that ultimately leads to the intake manifold. Ultimately how easily air flows through the intake filter and air box assembly determines how much the engine is restricted as it ingests air to combust it with fuel, and intake that restricts air flow will restrict the amount of air the engine can take in, which limits the power it can produce. Optimally, an intake should pose no restriction to the engine, so that the engine can ingest as much air as possible to produce the power it has the potential to produce. Typically factory intakes do this well, but as power is increased, the factory intakes pose more restriction and thus limit the power potential of the engine.At 034Motorsport we express our intake performance in pressure drop, CFM airflow and a Horsepower and TQ test. The most reliable of these 3 are pressure drop and CFM as these can be discreetly quantified for any intake in a very controlled way that allows the comparison of various intake system's performance potentials. The HP test is the most relative as it relies on many other factors that affect the power output of the engine including ECU tuning, exhaust modifications, turbo system modifications etc. Since the intake doesn't produce power itself, it only supports it, the actual power produced is always going to depend on the engine's performance and also if it has a supercharger or turbocharger system involved.When you see 034Motorsport's accurately tested and advertised flow data, you can be assured that the intake you are considering has a substantively engineered flow increase to support your future power goals and activities.

CFM stands for "cubic feet per minute" of airflow, the higher the number, the higher the horsepower an intake can support, at 034Motorsport we design our intakes to have substantial flow increases over the factory intake, we test all our intakes at 28" of water (how much vacuum is used to suck air through the intake) on a Superflow airflow bench which gives us very accurate and repeatable test results. A stock intake that flows 200CFM may only freely support about 300HP, an intake that flows 400CFM can support roughly twice that power or 600HP.

Pressure Drop is the difference in ambient air pressure and the air pressure measured at the turbocharger inlet across the engine's rpm range. The higher the pressure drop at any given rpm, the more restrictive the intake system is, reducing airflow.

034Motorsport's engineering and development efforts were validated on multiple vehicles using our Mustang AWD Dynamometer to ensure that the S34 Carbon Fiber Intake provided substantial increases in horsepower and torque on both stock turbocharger and ones with upgraded turbochargers alike.